A bespoke sustainability tool, developed by chapmanbdsp, that helps reduce the carbon footprint of buildings has been validated by the Building Research Establishment (BRE).

The ‘carbon calculator’ makes buildings more sustainable by mapping-out the break-down of embodied and operational carbon to better inform project decisions at the design and construction stages.

The tool was developed by Kartikeya Rajput, principal environmental consultant at chapmanbdsp, to support the London School of Economics (LSE) reduce the carbon footprint in constructing its new flagship Centre Building Redevelopment.

The building, which is due to open later this year, achieved a 35 per cent reduction in embodied carbon compared to its benchmark building type by reducing the amount of concrete used in foundations, aluminium in the façade’s shading fins and by incorporating more recycled content and low-carbon materials.

The tool also evaluated operational carbon energy use, which led to the implementation of low carbon energy supply technologies, such as Bio Fuel CHP, application of photovoltaics and extensive heat recovery being applied across various technical systems.

Kartikeya, said: “The tool was built to quantify the carbon footprint of the LSE-CBR in far more extensive detail compared with available industry standard software’s which formed an enhanced understanding of the critical areas for the design team.

“A part of the bespoke tool focuses on embodied carbon in building components, elements, materials and sub-elements and tracks the embodied carbon for the building during the design stages.

“Seeing the tool getting approved by the BRE validates our ability to develop high class environmental assessment tools and software tailored for project specific requirements.”

The BRE provides standards for the built environment and is the world’s leading building science centre.

Engineering firm chapmanbdsp, is an award-winning design consultancy that has provided building services solutions on some of the biggest projects across the world. The Centre Building Redevelopment is the third project it has undertaken with the LSE. The CBR was won through a competition with RSH+P.

For more information on the carbon calculator contact kartikeya.rajput@chapmanbdsp.com

Key to the graphic:

The first diagram shows the break-down of total carbon footprint during the life cycle stages in proportion to gross floor area over 60 years (KgCO2e/m2).

The last diagram demonstrates the carbon contribution of major materials used in the building (tCO2e). 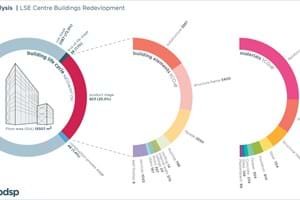 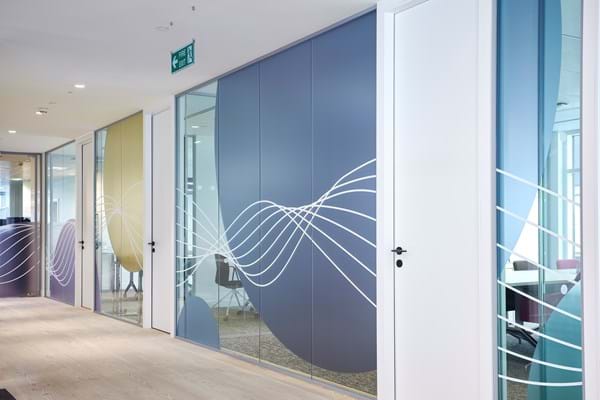